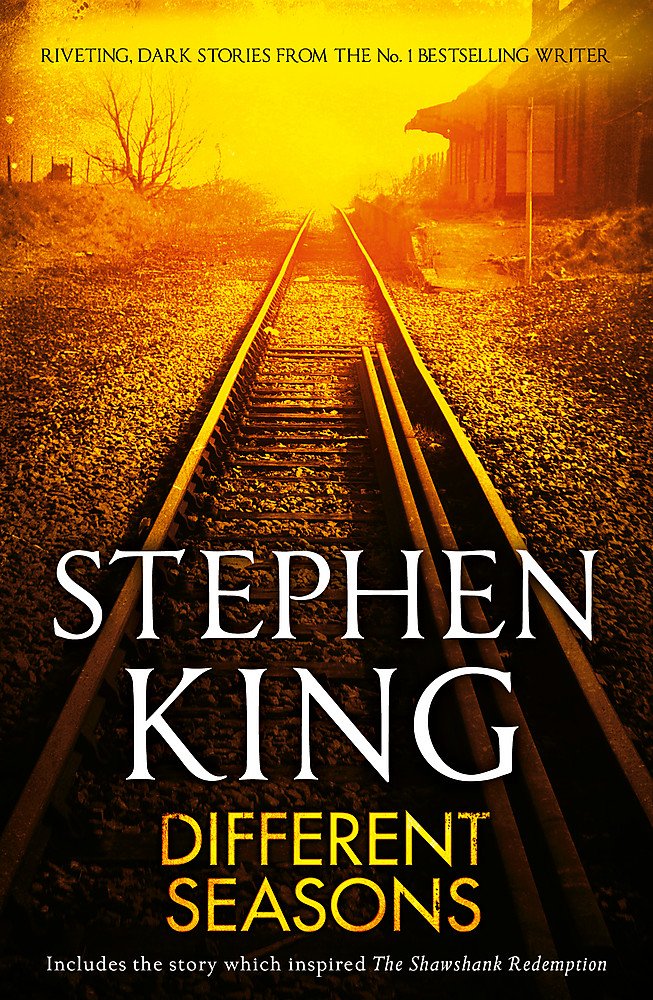 Read the original stories which became the celebrated films STAND BY ME, APT PUPIL and THE SHAWSHANK REDEMPTION voted the world’s most popular movie.

In this classic collection of four novellas, the grand master takes you on irresistible journeys into the far reaches of horror, heartache and hope.

Rita Hayworth and Shawshank Redemption is the story of two men convicted of murder – one guilty, one innocent – who form the perfect partnership as they dream up a scheme to escape from prison.

In Apt Pupil a golden schoolboy entices an old man with a past to join in a dreadful union.

The Body sees four young boys venture into the woods and find life, death . . . and the end of innocence.

The Breathing Method is the tale of a doctor who goes to his club and discovers a woman determined to give birth – no matter what.

I am a BIG BIG Stephen King fan. I have read many novels from Stephen King including the epics like It, Under The DOme, etc. but I rarely post reviews of his books. It is because there is no word to describe the writing of Stephen King. If I say that his novels are Good or Amazing Or Fantastic Or Wonderful Or anything else, I will be underrating his invaluable writing. Most of his books have an extent of more than 450 pages and many have even 1400-1500 pages. Writing a detailed review of these books will be like writing a short story itself. Yet I have decided to write a review of his (Add Any Positive Adjective) Novella Collection ‘Different Seasons’.

‘Different Seasons’ is a collection of 4 Novellas, which are in truth, not novellas as 2 stories are 200 pages long, one is 250 and only one is 70-80 pages long. Many writers are publishing Novels in these page counts but when we compare their sizes with SK’s Novels then they are absolutely Novellas.

1. Rita Hayworth & Shawshank Redemption- It is the same story which was adapted into the world famous Oscar Nominated movie The Shawshank Redemption. It is the story of a Banker who is wrongly sentenced to the prison for Murder of his own wife and is kept in the Shawshank Prison. SK beautifully describes the conditions inside a Prison and the physical and mental problems as well as situations faced by a prisoner inside a prison. Although it is written in the context of the American Prisons you will find a lot of similarities between them and the Indian Prisons.

It is my most favourite story in this collection.

2. Apt Pupil- In this story, a Teenager blackmails a Nazi who has taken refuge from the authorities under a fake identity and lives in the locality of the teenager. The teenager uses the Nazi to know all the gory and dirty details about the war and the different experiments of Nazis which are not usually mentioned in a school book.

Gradually the boy starts getting Nightmares and other mental as well as physical problems. Now, the boy and the Nazi both are in a condition in which they will either swim together or will sink together.

It is my 2nd favourite story in this collection.

3. The Body- It is an interesting story of 4 kids who go on an adventure to look at the body of a kid who died on a railway track. SK has tried to a simple story into a horrifying Roller-Coaster ride but I personally did not like the story much. It was a bit too stretched.

It is my least favourite story in this collection.

4. The Breathing Method- It is a Short Story of an Old Man who suddenly finds a club in which there are only strange things present. There are thick novels from unknown Authors and unknown publishers, there are unknown poems from known writers, there are almost infinite rooms in the building and each has a strange entrance and exit and many other strange things. There’s another strange tradition under which any club member tells a story to the other members before Christmas. This story is also based on a Christmas story told by a McCarron in which he tells us the story of an unmarried lady who has decided to give birth, no matter what are the conditions and please note that you will find the meaning of the line ‘no matter what are the conditions’ at the end of the story when you read it.

It is my 3rd favourite story in this collection.

As you may have noticed that SK has tried to turn the most simple things into complex and interesting as well as horrifying stories in his above works. The first two Novellas are a bit different from the Classic King Horror Stories and are kept simple but interesting, while the latter two stories are the Classic King Horror Stories which will give you nightmares and will keep you awake every night.

I have nothing to say about the writing style or anything of Stephen King as it is already widely acclaimed. The only thing I would like to say is that  PLEASE DON’T WASTE YOUR TIME AND READ THIS BOOK AS SOON AS POSSIBLE.

Stephen King is the author of more than sixty books, all of them worldwide bestsellers. His recent work includes Sleeping Beauties (co-written with his son Owen King), the short story collection The Bazaar of Bad Dreams, the Bill Hodges trilogy End of Watch, Finders Keepers, and Mr Mercedes (an Edgar Award winner for Best Novel, and shortlisted for the CWA Gold Dagger Award).

Many of King’s books have been turned into celebrated films, television series and streamed events including The Shawshank Redemption, Gerald’s Game and It.

King is the recipient of the 2014 National Medal of Arts and the 2003 National Book Foundation Medal for Distinguished Contribution to American Letters. He lives in Bangor, Maine, with his wife, novelist Tabitha King.